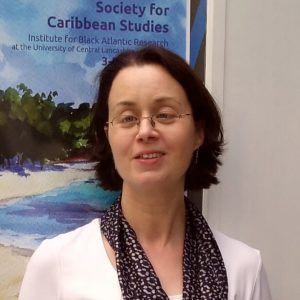 I studied English and American Studies, Art History, and History in Germany and the USA. In 2007, I received my Ph.D. from the University of Münster. I obtained my postdoctoral degree (Habilitation) from Bielefeld University in 2016. Since 2007, I have worked regularly as a researcher, lecturer, and visiting professor in American Studies in Bielefeld and Wuppertal.

Since September 2019, I have been a Marie Curie Research Fellow at the Institute for Black Atlantic Research (IBAR), University of Central Lancashire (UCLan) in the UK. My research interests include the genres of autobiography, travel writing, and drama. I also work in Ethnic, Gender, and Science Studies and on popular culture. Browse this website for more information about my work. I also teach modules on American literature and culture.

For more information about me, see my CV: CV ASTRID HAAS

Black Mobilities in the Atlantic World

Practices and discourses of mobility have been crucial for the Black experience across the Atlantic World. Civilisations from Africa and Europe have been in contact since antiquity, and interactions between Africa and the Americas may date back to premodern times as well. Later, Atlantic slavery and the globalized economy it enabled depended on the mobile placement and displacement of unfree black labour on both sides of the ocean. The acts and movements of Black resistance and liberation in the circum-Atlantic resulted from and further enabled the discursive and corporeal mobilisation of Black individuals and groups, from slave revolts to Black Lives Matter. Moreover, many works of Black cultural expressions not only resulted from various forms of Black mobility but, in turn, also sought to engender such mobilities themselves.

The conference “Black Mobilities in the Atlantic World” assembles presentations on Black mobilities in and among the Americas, Africa and Europe from a variety of academic disciplines and countries across the three continents surrounding the Atlantic. The event explores different forms and developments of Black mobilities from the colonial era to the present in their interactions with different socio-cultural identities, discourses, and practices. It thereby bridges often separately-studied fields such as Black Diaspora Studies, Area Studies, Transnational and Mobility Studies to complement—and complicate—the discourses of Black mobilities in the Atlantic World. The conference takes place in a hybrid format on UCLan’s Preston campus and online, with the option to move fully online if necessary.

Dr. Astrid Haas
Institute for Black Atlantic Research | School of Humanities, Language and Global Studies
University of Central Lancashire | Preston PR1 2HE | UK
see the CONTACT PAGE on how to contact me via email.

My new monograph is out now: 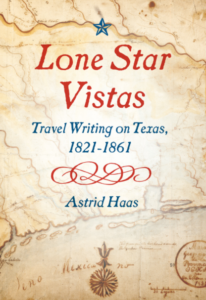 Every place is a product of the stories we tell about it—stories that do not merely describe but also shape geographic, social, and cultural spaces. Lone Star Vistas analyzes travelogues that created the idea of Texas. The book focuses on the forty-year period between Mexico’s independence from Spain (1821) and the beginning of the US Civil War.

Here, Astrid Haas explores accounts by Anglo-American, Mexican, and German authors – members of the region’s three major settler populations – who recorded their journeys through Texas. They were missionaries, scientists, journalists, emigrants, emigration agents, and military officers, and officers’ wives. They all contributed to the public image of Texas and to debates about the future of the region during a time of political and social transformation.

Drawing on sources and scholarship in English, Spanish, and German, Lone Star Vistas is the first comparative study of transnational travel writing on Texas. Astrid Haas illuminates continuities and differences across the global encounter with Texas. Her book also highlights how the individual backgrounds of the writers affected their views on nature, settlement, military engagement, indigenous resistance, African American slavery, and Christian mission.

You can purchase the book from these sites:

CAP offers a 30% discount with the discount code CSV21LSV.